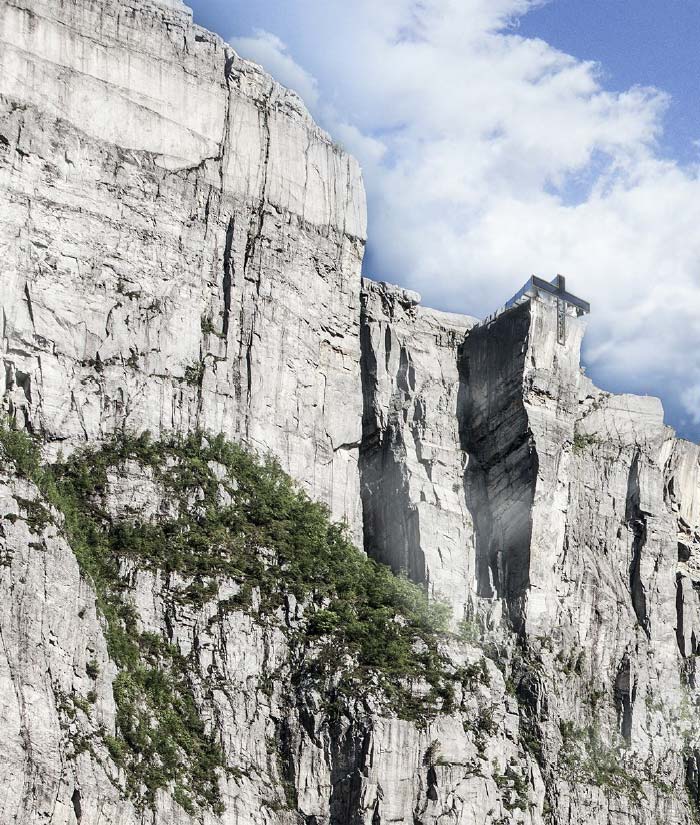 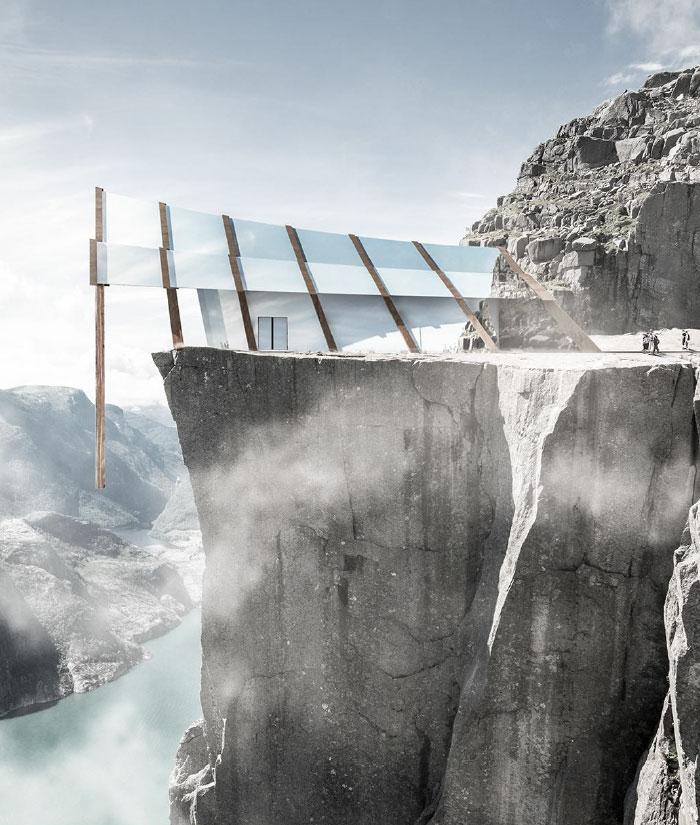 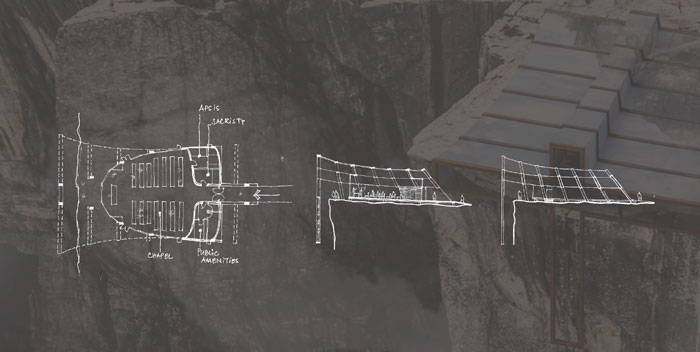 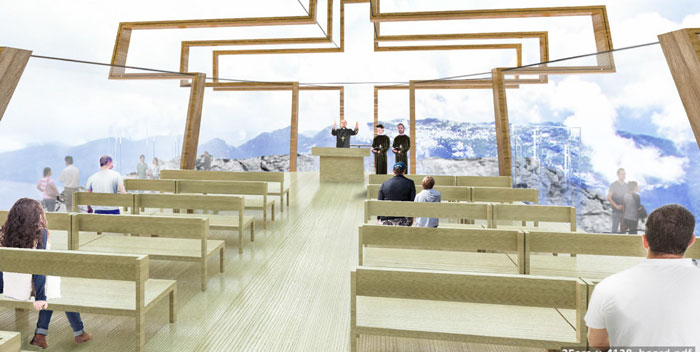 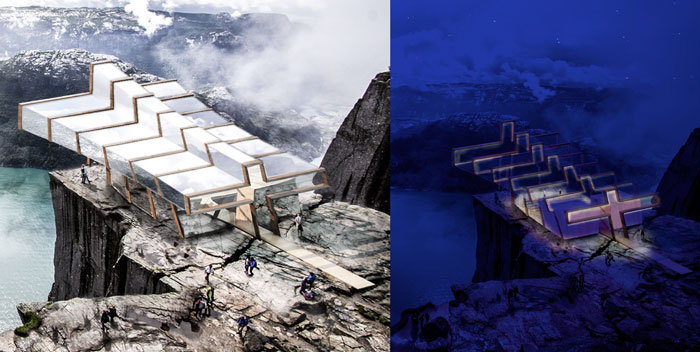 Preikestolen, also known as Pulpit Rock, is the one of the most famous tourist attractions in Norway. Rising from Lysefjord of towards the heavens, this sheer 604-meter cliff was formed by glacier, which neatly sliced a 25m2 x 25m2 platform on its peak. It presides over a breathtaking landscape that can only be described as a view of the world from the gates of heaven. It is indeed an ideal location for worship and reflection. The journey to reach this place parallels the life journey we all have, the struggles and joys to reach a physical and spiritual peace in our lives.

We embarked on creating a design that embraces its surroundings and respects the power of spiritual faith. With this in mind, this new church is aptly named “Heavens Gate”

The structure houses a Chapel, Apsis, Sacristy, Bell Tower and public amenities all within the competition guidelines of maximum foot print of 250m2. Our choice of materials and the visual impact is balanced with the cultural and environmental importance of the site.

Our design breaks away from the traditional medieval stave design, but retains the elements of multiple crosses and the use of timber and tier like structures. This approach ensures a connection between past and present and the value in embracing both.

The significance of the symbol of the cross in Norway, and its connection to its people’s Evangelical Lutheran Christian faith has been forged into the heart of our design. The inspiration is born from Genesis and the divine creation of the world, after which on the seventh day God rested, surveying all that was created. Acknowledging this significance, seven is a connecting theme that forms the foundation of our design.

Our building design consists of 7 structural crosses joined seamlessly by two-way glass panels which will enable the completed structure to blend harmoniously into the surrounding landscape. The angle between each cross alters in 7 degree increments, with the final feature cross suspended vertically 5 metres over the cliff face. During the day the glass reflects the sun’s rays while allowing an abundance of light and air to flow through the mirrored structure. In the evening, when the lights are switched on, the mirrored panels become invisible allowing the occupants become at one with the stars. From below, the structure has the appearance of a star floating in the heavens.

The bell tower is incorporated into the seventh cross which is suspended over the cliff face. To maximum acoustic qualities and minimize vibrations, the bells are located it the lower section of the seventh cross. This will also dampen the pitch of the bell whilst also allowing it to be amplified through the fjord. There are 7 bells each varying in size, which swing individually from the single pendulum.

We understand the complexity of the design brief and have considered the location and the logistics of construction throughout our approach. Being a temporary structure all the components can be easily disassembled and reassembled in another location if and when required.

Our design has also considered the logistical complexity of transporting materials and equipment to the location. The crosses being the structural elements would be transported to site by helicopter in pieces and then assembled on location. The two-way glazing is manufactured in sizes that are economical compatible.

We have chosen to incorporate the traditional Norwegian, timber panelling style of construction known as “Massive” for the structural elements being the Seven Crosses. “Norway Spruce” also known as “European White Wood” is the timber of choice as it is locally produced and is readily available.

Due to exposure of the structure to the elements, our design will withstand extreme wind conditions and additional weight loading caused by the snow in the winter months. To avoid dangerous icicles forming on the suspended main cross, we will customised heat system that prevents ice from forming. The system is charged via the onsite solar storage batteries which are located underneath the floor of the structure. These batteries generate power to supply the internal and external light fixtures. The batteries also supply power to operate the biodegradable toilet system. Open pods will capture the snow in the winter months. this water is gravity fed into storage tanks. These pods represent the Latin vallis lacrimarum, or vale of tears, which are left behind when one leaves the world to enter heaven. They acknowledge the passage of baptism through God’s blessing and the life giving powers of water. To minimise visual impact of the solar panels and water storage tanks, they are located behind the structure within the escarpment.

We believe that we have created a proposal that interprets the complexity exposed in the competition brief and approaches the particular urban and cultural environment of Norway. Our proposed solution is environmentally, socially and economically sustainable in its quality of the architectural design, respectful of cultural practices and includes the implementation of innovative technology.